Maserati has the Levante, Jaguar the C-X17 and Lamborghini the Urus – so why shouldn’t Fiat join in the fun and give the futuristic compact SUV market a red-hot go?

It might seem ridiculous to hear of each of the above European sports lines stepping so far outside of their comfort zones in an attempt to gain visibility in the ever-popular category, but the same could have been said of Mercedes, BMW, Audi and Lexus not long ago. Now that every second car seems to be some kind of soft-road faux-crossover it makes sense that the Fiat revival incorporates such a beast.

The concept car in question was revealed recently at the Sao Paulo Motor Show, demonstrating that The Little-Italian-Manufacturer-That-Could has re imagined its vision beyond pint-sized hatches and utilities. The result is the bizarre FCC4, which uninspiringly stands for ‘Fiat Concept Car…4 doors.’

But what the ride lacks in a name, it makes up for in personality. On first sight it’s hard to put the vehicle into words because of its incredibly striking shape. If one were to try and describe it, you wouldn’t get much further than ‘picture a Range Rover Evoque that’s been squashed…yep, even more so.’

Spend some more time ogling the car and allow the shock to settle and a strange appreciation for the shape will begin to take hold. This is Fiat, remember – iconic, Italian, design-orientated. Yet the facia of the FCC4 looks like something straight out of Detroit. It has that foreboding Chrysler aggression which melds into a sleek Korean headlight line. The mid-section looks sportily low-profile atop large off-road tires. All of this climaxes into a sportsback rear-end that would make MC Hammer double take. It is a wonderfully strange amalgamation of design from around the world – from the company’s Latin American design operation. 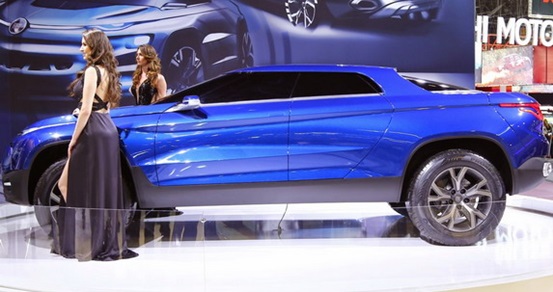 There’s no hint yet as far as which platform the ride will sit upon, leaving the possibilities open to borrowing from the Punto/500 set up or something built from the ground up instead.

No matter what your take is, it’s undeniable that the FCC4 questions the definitions of the CSUV category with this fascinating Frankensteinian beast. But will we ever see it in production?